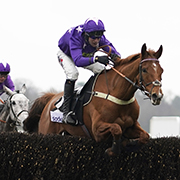 Named after the dual Grand National winner, Royal Athlete was a Reynoldstown winner who went on to win at Aintree five years after his success here.

As for potential Cheltenham Festival clues, three winners have gone on to win the RSA Chase; Killiney, Albertas Run and O’Faolain’s Boy but the likes of Envopak Taken, The West Awake, Nathen Lad, Kildimo and Bobs Worth also won the RSA after being beaten in this Grade 2 prize. Two winners have gone on to win the Cheltenham Gold Cup the following season; Little Owl and Mr Mulligan.

Going back to 2010, three of Nicky Henderson’s last five runners have won (Burton Port, Master Of The Hall and Vyta du Roc) and he looks set to be represented by Pym who won a novices’ handicap chase over course and distance earlier in the season. Seven Barrows also won with their Stayers’ Hurdle winner, Bacchanal, in 2001, and he was RSA favourite until the meeting was lost due to Foot and Mouth. Paul Nicholls is chasing a fourth win in the race with Danny Whizzbang his only entry.

Since Mr Mulligan won in 1996, only Bigbadjohn has won for horses aged over seven. He was one of two Rebecca Curtis-trained winners but she is not represented this season and neither is Nigel Twiston-Davies who also has a brace of successes. The only winning five-year-old was Jimmy Tennis in 2002 when they received a very healthy age allowance which has been severely cut since then.

In over 40 years the biggest priced winner has not topped 17/2 but, given that big a stat, winning favourites are not as prevalent as you might think with only three winning in the last dozen years.

Twelve of the last 17 winners won last time out (ten of which over 3m) but five of the last seven winners weren’t penalised for a pattern-race success which is a u-turn as six of the last 12 winners all told had won a Graded race before.

If you would like a free copy (excluding £2.50 postage) of Paul’s betting angles book, From Soba To Moldova, please contact Paul directly here.

Riders makes his way through Storm

National next for improving Ballyoptic

Cyrname back for Ascot Betfair repeat

Cyrname may return this season

Bowerman on course for Finals Day

Cyrname 'slightly stiff' but none the worse after Ascot scare

Wincanton off as other meetings monitor weather