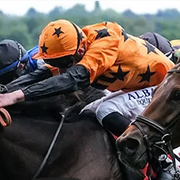 This handicap over 7f was first run in 2011 so is effectively the autumn version of the Victoria Cup over the same course and distance, though is usually worth approximately 20K less prize money.

Last season’s runner-up, Tabarrak, is amongst the entries having lost out narrowly by a neck when carrying top weight and this season he would run off a 1lb higher mark at the age of seven having then won at Listed level at Newbury. He was last of eight in a Group 3 on his only run this season so drops back in grade. Only one winner has carried over 9st 1lb, Remarkable in 2017 off second-top weight. There has been one winning three-year-old from 31 to face the starter with three others placing and also just one of the nine winners was aged older than five so Tabarrak has to overcome two early trends.

Ripp Orff won both the Victoria Cup and this race in 2018 and, as always with 7f handicaps at Ascot, previous course-and-distance form has to be respected. Due to Covid-19 there was no Victoria Cup this year but the Buckingham Palace over C/D was restored into Royal Ascot after an absence of five years. Course-and-distance winners amongst the 41 entries are Accidental Agent, Raising Sand, Blue Nymph, Tabarrak and Blue Mist who won the equivalent handicap at the King George Meeting which has been the strongest guide having featured five of the nine winners, though none of the quintet could finish in the first six here back in July.

Another trend well worth considering is that four of the last six winners were ridden by an apprentice, two 3lb claimers and two 5lb claimers. Last season’s winner, Salute The Soldier, became the first to back up a previous-race victory having won the equivalent race at Glorious Goodwood.

No favourite has won as yet but the last six have all hit the frame. As for the winner’s position in the market, it hasn’t been a punters’ nightmare however as seven of the nine winners could be found in the first six in the betting.