Heritage Handicap | Class 2 | 3YO only 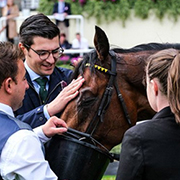 A heritage handicap for three-year-olds over 1m4f, it is always worth checking out the draw stats in double-figure fields over this trip in handicaps at Ascot like the Duke of Edinburgh Stakes at Royal Ascot where high-drawn horses have historically fared well. They tell a story here too as six of the last 11 winners were drawn 10+ in a race where the maximum limit is 16 runners. In fact, three of the five winners that were not drawn 10+ weren’t drawn low in 7, 8 and 9 and three of those were in just 11-runner renewals.

Saeed bin Suroor won the 2012 and 2013 runnings for Godolphin but doesn’t have any entries this season. William Haggas has marginally the better record in the last decade with a winner and three places from seven runners and he is responsible for five of the 22 entries so is likely to have a leading fancy. Andrew Balding’s record of a winner and two places from seven runners is more than respectable. Sir Michael Stoute on the other hand has managed just one placed contender from ten runners over the same period of time and his My Frankel has been inserted as the ante-post favourite.

Four of the last nine winners won last time out, including the dead-heaters Duretto and Wonder Laish in 2015, though LTO winners have averaged over four runners per running in the last decade so no real angle there.

No real angle with regards to weight but it’s been a pretty good race for punters of late with the favourite obliging in three of the last seven runnings.