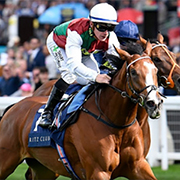 Three-year-olds towards the head of the market has very much been the way to go in this Class 2 fillies’ handicap over the straight mile so we'll major on that combination.

This is the tenth running and three-year-olds have won all nine editions to date. True, they have outnumbered their older rivals with around three times as many runners but, still, a score line of 6-3 rather than 9-0 would be more in line with respective representation.

The last six winners could all be found in the first three in the betting (in fact that applies to eight of the nine winners) and not one of those winning three-year-olds were sent off at any bigger than 7/1.

No trainer has won it more than once but John Gosden has saddled a winner and second from his two runners. His sole entry is Indie Angel who would be back down in class after struggling at Group 3 level last time having previously impressed beating the Royal Ascot runner-up, Salayel, by 3l at Salisbury. They could re-oppose here.

Amabilis has comfortably been the classiest winner when successful off a rating of 94 in 2017 as the other eight winners were all officially rated in the 80s beforehand.

Only one last-time-out winner has followed up here from 16 to try, though five were placed.