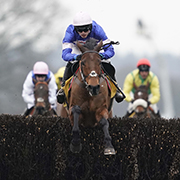 First run in 1995, the roll of honour features the likes of Kauto Star plus other multiple Grade 1 winners, Cue Card and Silviniaco Conti, and three Champion Chasers in Marthas Son, One Man and Voy Por Ustedes.

A highly-prestigious Grade 1 race in its own right and also a good guide to the Ryanair at the Cheltenham Festival. Since the Ryanair was promoted to a Grade 1, two of its 12 winners had previously won the Ascot Chase (Riverside Theatre and Cue Card) and two other Ryanair winners (Albertas Run and Fondmort) finished placed in this contest.

Paul Nicholls and Nicky Henderson have won three runnings apiece and look set to be represented by Cyrname and Janika respectively. Cyrname beat three other Grade 1 winners and also the subsequent Ryanair second, Aso, out of sight when taking the prize last season strolling home 17 lengths of the field and he will be a short-priced favourite to emulate in Riverside Theatre in 2011 and 2012 in becoming a back-to-back winner. Tiutchev also won it twice but two years apart.

Class has told in the last four years with Silviniaco Conti, Cue Card, Waiting Patiently and Cyrname all officially rated 164+ heading into the race which would be against the likely second-favourite, Riders Onthe Storm, who is rated 162 after his victory in a graduation chase over course and distance just before Christmas.

All 17 winners had won over 2m4f before and just one winner started at bigger than 15/2. It has generally been a good race for favourite backers with seven winning in the last decade and 11 in total.

Seven of the 17 winners previously ran in the King George VI Chase in which Cyrname finished runner-up and another tick for the x3 course winner is that six winners had won at Ascot before.

Eight winners were aged in double-figures of which the only entry this time is Traffic Fluide.

If you would like a free copy (excluding £2.50 postage) of Paul’s betting angles book, From Soba To Moldova, please contact Paul directly here.

Riders makes his way through Storm

National next for improving Ballyoptic

Cyrname back for Ascot Betfair repeat

Cyrname may return this season

Bowerman on course for Finals Day

Cyrname 'slightly stiff' but none the worse after Ascot scare

Wincanton off as other meetings monitor weather